Battle of the Teutoburg Forest

How to discover the Battle of the Teutoburg Forest? Glad you asked! It’s actually quite simple.

In order to find Aliso, one must first of all – as is fundamentally useful in historical studies when trying to determine the locations of individual facilities or individual events – determine the requirements for the location at which the facility could have been located or the event could have taken place, regardless of more or less random archaeological finds. For the fort Aliso, these are military but also economic requirements, that could be met by geographical and geological factors.

When Aliso was built, the Westphalian Bay was the main area of ​​expansion for the Romans. The fort should therefore be reasonably centrally located in order to monitor the Westphalian bay, and it should be located at the crossroads of several roads, so that the legionaries from Aliso could quickly reach various places in the Westphalian bay. And support from the Roman forts in Neuss and Xanten should also be able to arrive quickly in the event of danger.

Furthermore, the maintenance costs for the fort Aliso should be as low as possible. When it comes to maintaining a fort, the greatest expense is the food supply for the legionaries. The cost of the food itself cannot be minimized, but the cost of transporting the food can be minimized by building the fort as close as possible to the area in which the food is produced.

If you take these requirements into account, the optimal location of Aliso results in a place on the western edge of the Hellwegboerde. Roads that came from the forts in Neuss and Xanten and led further into the Westphalian bay crossed here. And in Hellwegboerde, thanks to the very good soil quality, large quantities of food could be produced with the means available at the time. The fort Aliso was therefore in the area of ​​today’s Unna.

Thus the Battle of the Teutoburg Forest took place east of Unna. To answer the question ‘how far east?’ it has to be clarified on which way the Varus legions were moving when they were attacked by Arminius’ forces. Here the question arises, where did the Varus legions come from and what place did they want to reach?
The question of ‘where from?’ can be clarified quickly, the ancient sources report that Varus came from the summer camp at the Weser river.
The question of ‘where to’ is now the last open point to find the location of the Battle of the Teutoburg Forest. Where was the area of ​​the tribe that had called Varus to help because of the uprising of a neighboring tribe, which is why Varus made a detour through the Teutoburg Forest on the way back from the Weser to the winter camp at the Rhine. The tribe that caused the Varus legions to be ambushed.
The last important place in Germania before the Varus Battle was the summer camp at the Weser, the first important place in Germania after the Varus Battle is the Marsi tribal area. Here the first attack by Germanicus took place in the autumn of 14 AD as part of his vengeance campaigns of 14 to 16 AD, and ended with a genocide on the Marsi. From a military point of view, the campaign against the Marsi was completely illogical, both in terms of the time of year and in terms of location.

The conditions for a campaign in the autumn of a year were bad because of the onset of autumn rains, and the success of an attack in autumn was also not sustainable, since the enemy could regroup in winter and spring. The attack site was deep in Germania, so a bridgehead for the attacks of the next early summer could not be formed. The Marsi genocide was also unusual. Romans were not squeamish, but even they rarely resorted to such means.

The attack on the Marsi was more like a commando operation behind enemy lines, which in this case was supposed to serve the purpose of annihilating the Marsi. The Romans obviously had a special bill to settle with the Marsi, and that on the 5th anniversary of the Battle of the Teutoburg Forest. The assumption arises that the Marsi were the tribe because of which the Romans were ambushed over.

At the time of the first attack during the Battle of the Teutoburg Forest, the Romans were on their way from the Weser river to the Marsi tribal area between the Upper Lippe river and the Upper Ruhr river to help them against the supposedly rebellious Chatti. The ancient road system of the ‘Frankfurter Weg’ led from the Weser river to the tribal area of ​​the Marsi. Thus, the location of the first attack in the course of the Battle of the Teutoburg Forest is roughly determined, namely the Frankfurter Weg east of Aliso / Unna, that is the Frankfurter Weg at the eastern end of the Westphalian Bay. On the basis of the ancient sources, the area can be narrowed down even more precisely, in particular the historian Cassius Dio reports in detail. Cassius Dio describes the site of the Battle of the Teutoburg Forest as a forest mountain range with deep ravines. The Frankfurter Weg leads through an area with deep ravines in East Westphalia via the Paderborn plateau.

Thus, the location of the first attack of the Battle of the Teutoburg Forest is precisely determined, namely the Frankfurter Weg on the Paderborn plateau.

Fig.: Determination of the location of the Battle of the Teutoburg Forest (Google Maps Link)

After the first attack, Varus broke off the detour to the south in order to first reach Aliso in a westerly direction and then the forts on the Rhine. The ancient road ‘Haarweg’ leads from the Paderborn plateau in the direction of Aliso / Unna. Thus, the entire course of the Battle of the Teutoburg Forest can be determined as follows: At the time of the first attack on the Frankfurter Weg on the Paderborn plateau, the Varus legions moved southwards, and in the following 3 days they moved westwards on the Haar height resp. on the Haarweg, where they wererepeatedly attacked by Arminius’ forces and ultimately defeated.

Fig.: Course of the Battle of the Teutoburg Forest (Google Maps Link)

First archaeological finds, e.g. a Roman stylus, are indications for the correctness of the theory of the Battle of the Teutoburg Forest between Paderborn plateau and Haar height. 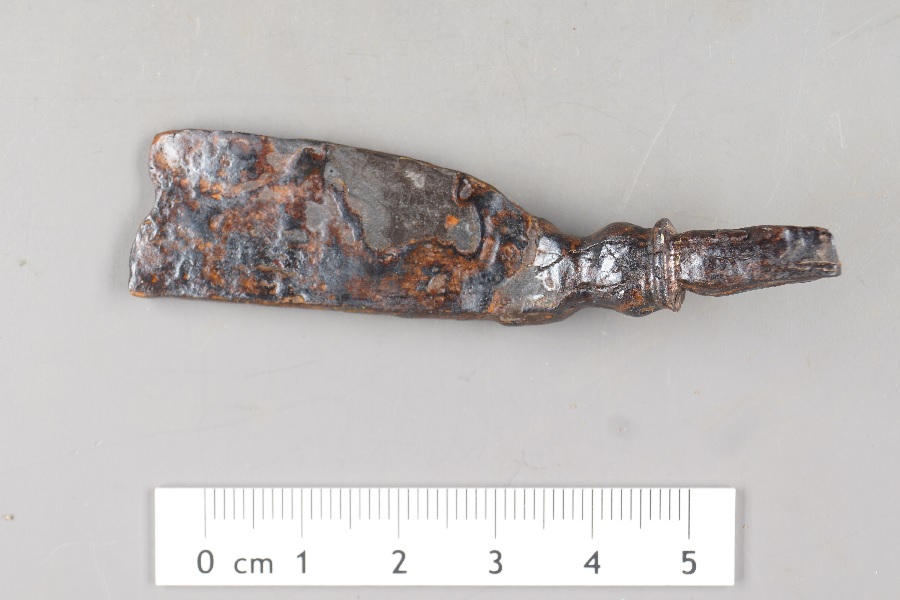 So much for the rough summary of the theory, it goes on in more detail here: Battle of the Teutoburg Forest- ALISONENSIS

Manage Cookie Consent
To provide the best experiences, we use technologies like cookies to store and/or access device information. Consenting to these technologies will allow us to process data such as browsing behavior or unique IDs on this site. Not consenting or withdrawing consent, may adversely affect certain features and functions.
Manage options Manage services Manage vendors Read more about these purposes
View preferences
{title} {title} {title}